{poem + story} my body, a wild sculpture of rainlife. 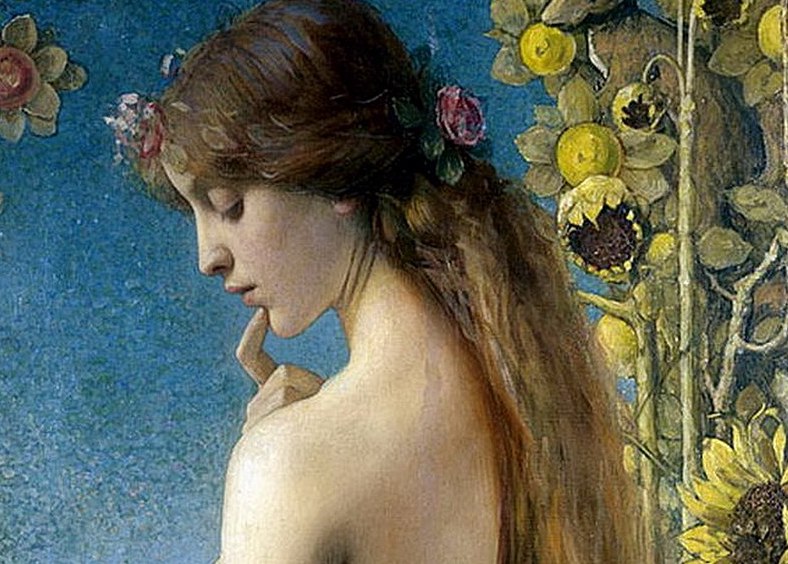 i haven’t yet felt the wind’s coolness move me
in clarity, anticipating

the musky, sweet, wet air
that can only be inhaled from the moistening earth
when winds marry rain

how could it rain today?
we haven’t yet touched
nearly enough in one lifetime to be satisfied

no, not yet, bodhi rain

My new poem is inspired by “It is Going to Rain” written by the beautiful Tohono O’odham author and poetess Ofelia Zepeda. Not only an amazing poetess, Zepeda is well known for her efforts in the preservation of and the promotion of literacy in Tohono O’odham – and has spent many years working with her tribe to improve literacy in both English and Tohono O’odham. In 1983, she developed “A Papago Grammar” from tapes of Native speakers because no textbook existed for the classes she taught. She is also the editor for Sun Tracks, a publishing program featuring Native American works.

The artwork is one of my most favourite paintings of all time, and it is by French Symbolist painter Louis Welden Hawkins. Born in Stuttgart, Germany on 1 July 1849, to an Austrian mother and English father, he soon moved to France taking on French nationality later on, and spent his life there. Hawkins was known to move in so-called “radical circles” with free-minded people, and a great defender of humanitarian causes. After his education at the Academie Julian, he chose the path of Symbolism. Symbolism began as an artistic movement that developed from Romanticism in France in the second half of the 19th century.

Like we talked about in “You will be in white” by Peyo Javorov, Symbolism was a movement which married the physical with the mystical, and the sacred. Symbolists attempted to weave natural imagery and metaphors to express the universal and the spiritual, tackling themes of love, trust, purity, temptation, faith and predestination. In its essence, symbolism, as described in the Symbolist Manifesto (“Le Symbolism”) by Green poet and essayist Jean Moreas, sets out to “clothe the Ideal in a perceptible form” and to reject “plain meanings, declamations, false sentimentality and matter-of-fact descriptions.”

In the world of painting, Symbolism was a reaction to the impressionism. Symbolist paintings emphasized fantasy and imagination in their depiction of objects, and the Symbolist artists often used metaphors and symbols to suggest a subject and favored mystical themes. Hawkins became famous because of his fine and dreamy female portraits, such as this one featured above.

In Sanskrit and Pāli, the word “bodhi” translates to “awakening”, “enlightenment”. In Buddhism, bodhi is known as the final Enlightenment. It is essentially what leads us into a state of Nirvana, or when we can touch that ecstatic state, because we’ve seen beyond the limitations of our human minds, we’ve seen beyond the logic and reason, we’ve felt the unnamable fill us on our inside of. We’ve let go of conditioned beliefs, false beliefs, and we are awakened into our intuitive, inner truth and experience. In Japan and in Zen Buddhism, this is known as Satori. It’s the unexplainable and indescribable – it is the ineffable that only the souls and hearts understand, perceive and know. Bodhi is the Buddha “Awakened One” and also refers to the experience of Buddha when he sat under the Bo tree and suddenly all veils were lifted and he saw clearly.

When we come into such seeing, a sense of deep love and compassion and kindness takes over us – a sweetness, that molds us into a being of aliveness, vitality, and of love.

While this all may sound unattainable unless we meditate like monks all of our lives, every time we touch these feelings and seeings, because we love, because we give, because we play, because we laugh, loud in good ol’ belly laugh, because we see beauty in something tiny and small, because we hold the hand of someone we love and we hug them tightly, as tightly as possible, because our entire life is fulfilled when we see them smile – it is Bodhi. Even if only for a moment, it is Bodhi. And we remember. We remember our hearts. Because it was only ever love. Then. Now. Always.

You can also visit my poems page, check out my two love poetry books, Moonhold (2019) and The God-like Things (2021), listen to my spoken word while musing over some of my videos and photography.

If you value what I do, you can support me and my publication Art of Love by sharing my articles and poems, buy my books or donate some magic coins in my hat on Paypal. By supporting me, you allow me the freedom and ability to be even more creative and contribute with more. All proceeds go towards expanding my work made of love, including publishing my books, my humanitarian projects and creating content including courses and holistic programs. And if you would like to work with me, hire me or collaborate, feel free to contact me.