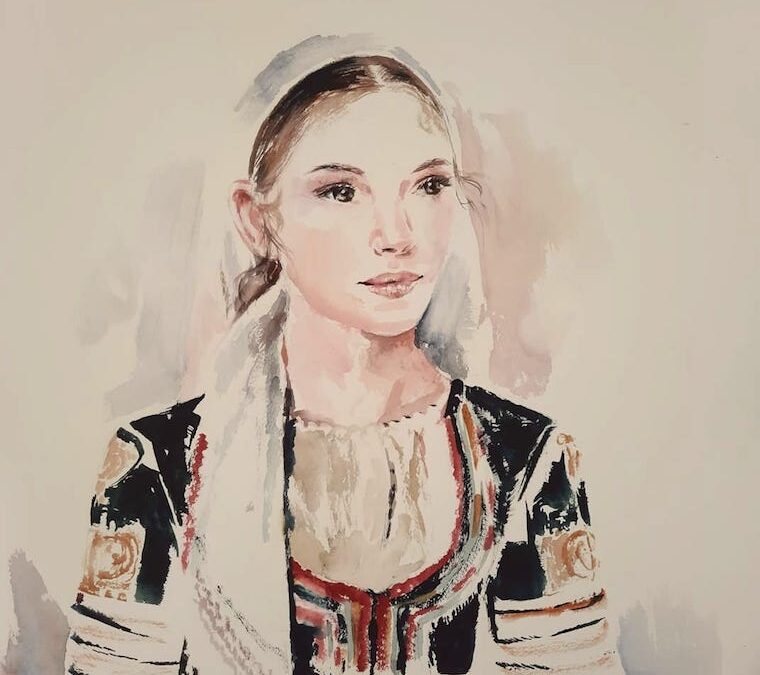 Female blood …
The blood that creates
worlds of tenderness,
sorrow and glory,
thoughts about the night,
the pain from everything,
from jealousy to death,
pagan love.
Pagan to believe
and to hide in pagan ways
from all,
that you are in love …

And your shadow
comes and asks me
if I carry from this “pain”
in my eyes.
But wasn’t it you
who crucified me on it first!

Many, many, years ago my grandparents gifted me a beautiful book, the historical novel “The Iron Candlestick” by Dimitar Talev (“Железният Светилник” от Димитър Талев), which is one of the most treasured gems in Bulgarian literature. On the inside of the book they had written me a dedication: “To Lubomira, with so much love and deep respect, with the hope that no matter where she finds herself in this beautiful world, her love for her home land and her heritage will never burn out.”

And here I am. Still burning. Still, never forgetting. My heart is too big.

{poetry translations} is my new series in which I will delve into the hard task of translating poetry. As this year is coming to a close, many people say “let go of the old to take it the new”. And sure, we need to de-clutter, always. But it is just as important to stay close to our roots, remembering those who came before us; those who paved our way, as the land today is the one we borrow from the future generations also. I believe that old and new can dance together, weave together, and hold each other’s hands. I believe knowing our roots, knowing history, is a devotion to never forget, so that truly new things can unfold. This is why I dedicate part of Art of Love to retelling old stories and lore in my series The Story Threads.

Having lived across three continents, I’ve not only been blessed to experience new cultures and traditions, but I’ve also seen how new worlds open when we speak another language. Just by learning a new word, a new world opens, a new experience is felt through our body. And we also open up new worlds for others to experience, when we can gift the gift of translating works made of love.

While all literary works are hard to translate, poetry certainly takes the crown as the hardest one. It not only requires the translator to understand the depth and essence of the poem, but then they have to allow the “other” language to carry its meaning forward. Words while they could be literally translated, don’t necessarily carry the same meanings. And in many ways, I feel that translations are a work of artists, a way of dancing with, and in-between, worlds, re-shaping words while allowing the thread of love to carry forth the essence and meaning of the poem’s heart. Hopefully, I’ll do these older poets and poetesses the justice they deserve, and hopefully, for you, my dear reader, I can open up another world, of touching the heart of foreign words.

About the poem and author:

Dora Gabe (1886-1983) was a Bulgarian-Jewish poet, writer, translator and activist. She published poetry for adults and children as well as travel books, short stories and essays. In her later years, she also did extensive work in translation, and was considered a pioneer for her great contribution introducing foreign artists and writers in Bulgaria. She was also renowned for her humanitarian work, passionately fighting for human and children’s rights. Dora Gabe is widely regarded as one of the most successful Bulgarian poets and is beloved by Bulgarians not only for her work but for her deep respect for all arts and her charitable spirit. A popular anecdote claims that after the 9 September coup d’état, she welcomed partisans to live in her apartment. She then moved to her sister’s unfinished villa where she had to sleep with a coat under the blankets, because there was no heating, and had to turn on the stove to warm her hands in order to be able to write. Later in life, Gabe opened her an apartment as a home to young poets.

“Female Blood” was actually only published after her death, as per Dora Gabe’s request. This poem was deeply personal to her, and is dedicated to her great love, the famous Bulgarian poet Peyo Javorov. They shared a very intimate bond, which wasn’t even publicly known. It was only in 1964, many years after Javorov’s death, that Dora shared the depth of her love for him in the little city of Chirpan, reading some of his letters sent to her, written in 1905.

“I have loved you since the first moment that I saw you, and this made me scared for you. Dora, the more I loved you, the more I feel obligated to tell you that, while I am still a little sane, you have to stay away from me – you have to be careful not to fall in love with me! Let only I love you from afar.”

Their relationship was marked by silence and misunderstanding, and Dora Gabe once shared that he never even kissed her. However, this poem seems to suggest otherwise, which is perhaps why Gabe didn’t want it to be published during her lifetime; she wanted to keep the nature of the bond they once shared private. While they didn’t end up together, in “Female Blood” she writes of a love that crossed the thresholds of the spiritual, and forever remained in her heart.

Peyo Javorov was one of the most beloved and famous poets in Bulgaria, and still is today. He was incredibly romantic and his poems are ones people can’t help but fall in love with. You can read some of his love poetry that I’ve translated here. In fact, the Yavorov Peak on Livingston Island in Antarctica is named after the poet. His real life unfortunately was marked by tragic and heartbreak. Most notably, he was deeply in love with fellow writer Mina Todorova, who died of tuberculosis at the tender age of 20. This devastated Javorov, and he would visit her grave every day for the next six months. Many people felt that he never truly got over this loss. He dedicated many beautiful poems to Mina for long after.

The paths of Gabe and Javorov crossed in 1905, at which time he was already a published, and widely beloved and recognized poet. He was also the mentor and poetry teacher of Dora’s roommate, Ekaterina Nencheva, who one day accidently came across Dora’s notebook of poems. Being taken by Dora’s sensitivity, she took the poems to Javorov, who loved them just as much. He saw great potential in the young woman’s depth of emotional world and sensitivity attunement, and asked to meet her, so that he can become her mentor. Javorov never stopped encouraging Dora to believe in her gift, talent, and allow her sensitivity to flow through her poetry like water. He helped her have more trust and confidence in herself, and mentored her in polishing her writing skills. He created the needed supportive space for her to unveil her true essence and be free in her creative expression, and believed that she will one day, inevitably, become a great poet. It was without a doubt, he, with his gentle encouragement, mentorship and endless support, who helped her unveil her true gift and talent, to become the beloved poet that she was destined to be.

When Dora had to leave to another city, as she often travelled, they always exchanged letters to one another, and in one of the letters he wrote:

“If you develop in the direction in which you went, and reach not even a great, but a medium height, you will play a historical role in the development of our literature.”

At the same time, he didn’t hide his feelings for her, and for her true beauty:

“… and I ask you again, without asking for an answer, why your soul is so beautiful, why it is just a song?”

“When we met, I dreamed of you for a weeks, so many nights one after another… I loved you from the first sight…”

It was said that he sent her a bouquet of poems each morning as letters, and this was the reason she named her first poetry collection in 1908, “Temenugi” (“Violets”).

While the reasons why they never ended together remained unknown, according to Lyuben Georgiev, it was Boyan Penev that caused the relationship between Gabe and Yavorov to break off. In his book about Yavorov, Georgiev tells that a few days after the acquaintance between Dora and Boyan Penev, Yavorov invited Gabe to the theater. Going to the theater, Dora was greeted by Penev, who wished to accompany her to the theater. When Yavorov saw them together, he tossed the tickets in their hands and left defiantly. A few years later in 1909, Boyan Penev became the husband of Dora Gabe.

Peyo Javorov died at the young age of 36, and while Dora Gabe lived a long life, full of travels and success, towards the end of her life, she famously said:

“Every person needs a great love. Only one in your entire life. I only ever really loved Yavorov.”

This was part of my {poem + story} series where I share new poems, inspirations and art. You can also read poems from my two full-length poetry books in my poetry section, and learn more about my books, Moonhold (2019) and The God-like Things (2021). Both are available for purchase, signed copies upon request.

You can also read my essay on “The Power of Poetry” published in The Poetry Question Journal, on the connection between poetry and mysticism.

The cover art in this article is the beautiful watercolour painting of Bulgarian artist Boyana Petkova. I love her paintings and feature two of my favourite ones in my essays, What Secrets Water Knows and The Secret Threads.

If you are a Bulgarian poet/writer wanting your work translated by me, you’re absolutely welcome to contact me.

I love what I do, and if you want to support me, you can do so by sharing my articles and poems, buy my books or donate some magic coins in my hat on Paypal. If you would like to work with me, visit my Sacred Offerings.