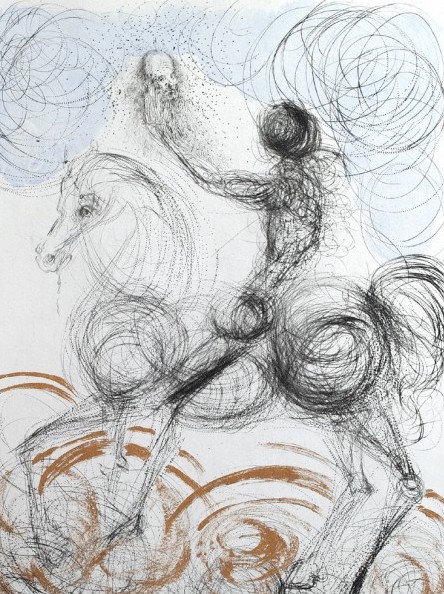 The knight in shining armour saves the damsel in distress. This is what most people remember about traditional fairy tales. But this is not where the story ends and there is much more wisdom in these tales, if one has the eye to see it. Throughout the tale, the knight has become a king and the damsel has become a queen; they’ve gone through an archetypal development, referring to the transformation towards emotional maturity.

In our modern world though, the damsel-knight dynamic is played out by adults – where adults keep on saving and distressing – and unfortunately we have never been taught how to develop into the next phase. While both of the damsel and shining knight phases are needed and purposeful – and we have all been either saving or distressing at one point in time – such a dynamic is not long-lasting and will eventually fall apart or become toxic. We need to move forward into a next phase – and for the knight that means having his armour tested to become a warrior and become a king. (While I will be discussing the knight – this archetype can embody all of us at different times in our lives.)

What is an armour?

The armour is the imprisoned heart.

Why is it shining?

Because the knight hasn’t gone through the transformation of emotional vulnerability and the hidden realms of his inner psyche through the lessons of desire, pain, intensity, surrender, acceptance, forgiveness and devotion. He is afraid or incapable of true intimacy because he hasn’t yet accepted (and integrated) his shadow side – and is not yet emotionally mature to sustain a long-term relationship and build a future kingdom. He is comfortable saving damsels – but is incapable of nurturing a real love and supporting a woman. In a deeply subconscious way – he’d rather have his damsel continue to be distressed so that he feels better about himself.

The knight in shining armour loves damsels in distress. Because by saving them, he feels needed. It gives him validation of his “perfect” existence. We all need to feel needed of course, and there is nothing wrong with that (in fact, we should show our partners how valued and appreciated they are in our lives all the time) – but the intention here is different; he wants to mask who he truly is and be needed only in times of crisis. When a damsel is distressed, the only thing he has to do is just “save” her. He does not need to open up at all emotionally or be anything more than just be there because she is broken and she would suffice for anything. So, he feels strong and invincible. He hides behind this image. And when the damsel stops distressing, his deeply rooted insecurities start boiling to the surface. When things are going fine and our focus is no longer running on some crisis is when we can finally focus on our emotional needs. And this is where he comes short, so he starts to feel insecure.

At this point of the relationship dynamic there are two choices: either the damsel needs to start distressing again creating new problems and drama so that he feels needed to save her again, thereby refocusing to distract, or he will eventually be tempted to save another damsel to validate his fake knight-ship status. He will call it love but it’s not.

The knight and damsel relationship cannot be a long-lasting healthy one. Eventually it falls apart or becomes co-dependent and toxic. Unless both of them develop to the next phase as selves.

In traditional tales, the knight undergoes transition. Sure, he wears a fancy armour but then goes off to fight dragons for a chance on real love — the dragon symbolizing the fight with his inner fears and the perseverance and courage needed to mature by facing and accepting it. The knight undergoes an intense transformation of self-development. He is stripped bare of his armour completely humiliated. He is forced to be completely vulnerable and face the dark night of his soul. He needs to fight his own dragon. And only after that he can reach the real princess, kneeling before her, symbolizing his surrender in love and devotion and maturity of feelings. He will say “I love you” not because he expects her to feel the same – but because this is how he feels truly. It’s his integrity to stay true to his heart – his true self does not need someone’s validation (or social media likes); his love does need to be requited – he loves without expectations. He will care for her unconditionally and provide her with the support, stability and trust required to build their kingdom. At this point he becomes a king.

One of the many, many, reasons why men are no longer “men”, and are often described as stuck in “boy psychology”, is because initiation rites are no longer practiced. Men have to face their fear of death, symbolized by the dragon, who rules the deepest fears in esotericism – and their initiatory rites often times included a hunt in the forest where as boys they’d be dropped off to learn to survive on their own for a few days, or in some shape or form an initiatory rite which faced them with nights of darkness, etcetera. This was meant to initiate them into their full healthy masculinity.

For women, the rites of passage into womanhood was different – it wasn’t to conquer fear, but rather to learn to ride it through their intuitive development, nurturing abilities and the power of perseverance. Women’s initiatory pathway led them through the rituals of life, not death, as I discuss in depth in Women’s Rites of Passage.

A queen doesn’t need saving – but she needs to feel safe with her chosen one. A queen wants a warrior who will become her king — the one who will stand by her and protect their home. The one who will defend her name and honor even when she cannot hear him. The one who is loyal and ready to build a kingdom instead of running around masking his insecurities. The one who expresses his love and emotions so that they can go through life’s challenges together and communicate openly and honestly. The one who has proven worthy of her, opening the gates with his bravery, strength, stability, security, integrity, encouragement, and caregiving. Stability in relationships doesn’t mean a boring life without passions. Stability refers to emotional intelligence and the ability to build a connection on solid foundations. It means you don’t sit there doubting or worrying what they think or feel or want; it means they are emotionally mature and know who they are and their words actually carry weight; it means they have certain values and integrity that they align themselves to; it means being able to trust and feel safe with someone; it means knowing that they have your back and are committed to this thing called “us”; it means that despite all the challenges of life’s rollercoaster, they will sit right there next to you no matter what and will work to figure it out with you throughout the most uncomfortable moments. It means you are with a real man or woman and not playing little children games anymore. This is what makes a relationship long-lasting, and this takes two.

A king is emotionally mature. He doesn’t play games and he knows that sometimes he’ll feel weak, he’ll feel afraid, he’ll feel worried. But that’s okay – because that’s just life and he’ll deal with it maturely – not deny it, not avoid it, not suppress it, not say “all is good” but deal with it in a healthy manner and resolve it. A king has conquered his dragon and integrated him into his Self.

The knight phase is a needed phase, just as the damsel phase is a needed phase. Both of them are building their strength in their own way. But after that, it needs to develop and they need to transition into the next phase — we can’t keep on saving or distressing. We are rarely taught how to do that but we must do it. The princess has to become a queen and the knight has to become a king.

With the king by her side, he will become the protector and the roof  of the kingdom that they build together — and the queen by his side will become the walls holding and nourishing the space in which a family of love will be born — one built on intimacy and deep stable long-lasting connection.

The Intiatory Pathways: Maturation from Boy to Man, from Woman to Queen

What True Love Really Is

Love, Devotion and What is Purpose

The Gift of the Magi: Love, Selflessness and The Eternal Virgin

Sacred Relationships and How to Build Them

What Every Woman Needs

The Art of Intimate Communication

Bluebeard: The Key to Knowing

Beauty and Her Beast

Breath of Life: The Esoteric Symbolism of True Lover’s Kiss

If you value what I do, you can support me and my publication Art of Love by sharing my articles and poems, buy my books or donate some magic coins in my hat on Paypal. By supporting me, you allow me the freedom and ability to be even more creative and contribute with more. All proceeds go towards expanding my work made of love, including publishing my books, my humanitarian projects and creating content including courses and holistic programs. And if you would like to work with me, visit my Sacred Offerings.