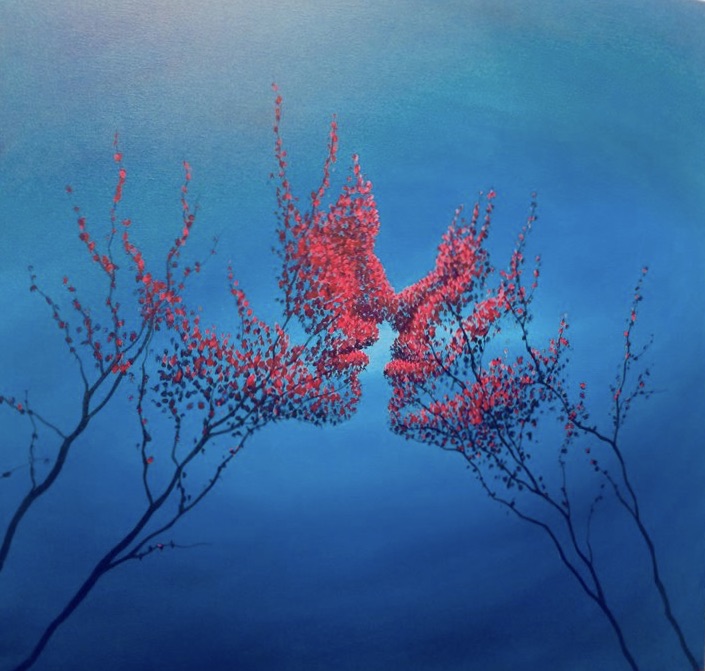 To talk about quantum physics we must first understand the concept of time. Here on Earth, timing is linear; it’s a bunch of numbers, the clocks are ticking and we are ruled by some squares on a calendar. But in the psychic realms, time is not linear; it is as fluid as water. Its ever-changing essence is continuously fluctuating, adapting and moving. Like all things, here or elsewhere – it is energy.

Telepathy is the energetic transfer of touch, feelings, ideas, thoughts, emotions and sound, even when the other person is miles or continents away; it is a form of extra-sensory perception (ESP) and is categorized similar to claircognizance and clairvoyance. A telepathic connection is the energy bond connecting two or more minds into the same energetic wavelength.

In quantum theory, entanglement is the term used to describe the way particles can become correlated to predictably interact with each other regardless of being separated by an arbitrary spatial distance. In other words, entanglement suggests that once part of a system, two particles will remain in communication with each other even when separated; and this is because they will carry their resonance and particular vibrational energy. Since we as humans are also made of energy, this further suggests that such connections and interactions exist between individuals also. And more precisely, this relates to soul connections or soulmates, who share a very deep soul bond with one another from many life times. (“Soulmates and The Purpose of Relationships”)

The Quantum Experiment. The quantum entanglement experiment was conducted by Miles Padgett, professor of physics and astronomy at the University of Glasgow in Scotland. Padgett and his team first entangled photons, or light particles. When they hit a crystal with an ultraviolet laser, some of these photons from the laser broke apart into two photons. Padget noted that “due to conservation of both energy and momentum, each resulting pair [of] photons are entangled.” They found that the entangled pairs were correlated and in sync more frequently than was expected; that the particles (energy/thought) were interacting with each other and remained connected, instantaneously sharing their physical states, no matter how far apart they were.

Remember all those particles, and atoms with their electrons that existed in the singularity and then inflated during the Big Bang? Those particles were all connected, all entangled as they expanded outward into what became the universe. We know through science that they can’t de detroyed but only transffered and transformed; and these particles then made up you and me and everyone. The particles that make up our mind and conscience are still connected, still entangled with their perspective particles. This means that we, on a quintessential level, are connected to the other particles, and people, on a subatomic level. But we don’t need to go that far back.

Soulmates find each other; somehow somewhere they just do. You can’t miss it. Because it’s energy. Everyone from Plato to Hinduism and Buddhism, talked about the soul re-incarnations and that past life connections and soulmates always gravitate towards each other because it is known, familiar and feels like home. You’ve imprinted on each other like muscle memory in your energetic field, and vibrate on a certain level that is recognizable only by you. No matter how physically apart you are, separated by time, space, and even if you haven’t yet met each other in this reality, there is an energetic pull, or an energetic thread connecting you. In the same way, you will create new energetic threads with other people in this life when you bond on a deeply emotional, physical and spiritual level.

For more intuive people, they have probably felt the connection with their soulmates throughout their life, despite not knowing how they looked physically. And there will be instant recognition once you see each other.

Telepathic communication is quite common between soulmates, or between any lovers who are intuitive or extra-sensory themselves. The telepathic connections occur at different times, where the two are sending and receiving signals, and yet most times, it is unconscious; the two people are communicating telepathically without even knowing it.

Before I go on, I want to open up an important bracket: You must respect the spiritual laws and have the integrity of never entering someone’s space without their consent or obsessively thinking of them. It is highly unethical and carries karmic consequences also.

A stranger can’t really go into our private thoughts or act like a psychic spy because we all have a natural force field or barrier that protects our thinking from others. However, we can give permission to another by mentally lowering this field. Telepathy uses two psychic sensors to work: your solar plexis chakra and your temporal lobes, both of which are in direct connection to your astral field and all of your five senses. Through telepathy, we can not only communicate, but we can also have telepathic sex, and send healing energy to one another when one of us needs us.

Okay, time for another bracket. It is important to understand that people who have opened themselves to one another through love and a strong emotional connection will share a strong energetic bond and energetic ties through the quantum entanglement. If you are a highly sensitive person, or an empath, or clairsentient, or have ESP, you will be feeling them into your energetic field no matter how long time has passed since you’ve separated, no matter how far away from you they live, no matter the last time you talked or saw one another. You have both shared a quantum entanglement and even after separation, you are a part of this energetic thread; their energy will still be affecting yours. This means that if you are not aware, you might suddenly have thoughts or feelings of what the other person is thinking and feeling; and you will also pick up on their experience and what they are going through as if these experiences were felt through your own physical body. You are connected to this energetic thread and whatever affects them, will affect you. It is of absolute importance to understand how to set boundaries for yourself, that it is okay to say “no” to the energy coming in, and to learn how to discern what’s your energy and what’s someone else’s that you are feeling as your own. And so, if you are experiencing quantum entaglement, as the energy of someone that you’ve been deeply involved with, whether or not they are in your life currently or not, it is important to set energetic boundaries and find a way to shift the focus, cleanse the energy, and channel it into creativity which would connect you to something of purity and to a higher source – so that you are not left vulnerable to the other person’s thoughts and actions which could be negatively affecting you. You have to find a way to shift your vibration, whether through creativity or change in routine, and through extreme discipline, so that you can get back to your own self grounded within. It will be difficult to do this, so just be patient with yourself and try to focus on creativity as much as possible, while also staying grounded with various methods and tools. And when you feel their energy come in, immediately shift out of it, acknowledge it because it is coming from someone, and say “this is not mine, I reject it.” This is not to disassociate from your own feelings, this is about feelings that are not your own, and you know they are not your own. This is why it is important to understand what’s truly going on based on who you truly are. Be mindful. If you truly are an empath, clairsentient or have ESP, it is for your wellbeing to learn boundaries, protection and how to discern energy.

Now, back on topic.

How do telepathic communications occur?

Without knowing: You know how the other feels, sad or happy, despite not having heard from each other in months or years, and living apart from each other, perhaps in different continents. You know what the other is doing and you get glimpses of where they are like images in your mind.

Same thoughts at a time: Many times it might feel like you are literally the same soul, the same mind; when you are about to say something, the other automatically knows what you’ll say.

No words: You speak and know without words. That’s not an excuse not to communicate because all relationships rely on communication, human communication. But instant telepathy is the first mode of communicating. You can sit quietly for hours, and their thoughts are in your head. This is usually advanced telepahy.

Dream state: You may share the same dreams, and/or see each other’s dreams. You may even astral travel in your own dreams and many times this is how you communicate and even resolve unconscious “conflicts” between that two of you. In the morning, you may feel tired, and that’s because you’ve been “travelling” all night.

Telepathic sex: This happens just like physical sex but they are in pure energy form. What happens to your own physical body though is very much physical as a sensation. And any time one of you is thinking of the other during self-pleasure – even if far away or not talking to each other – the other will feel your sexual energy suddenly taking over them.

Telepathy isn’t just about the communicating. There is a continuous mind to mind connection, even if unconscious, and it can show itself in different forms such as, going to the same place on a specific date, or suddenly taking up a new interest which leads you to meeting one another; or a word can pop up in your mind out of nowhere, you go online searching for it, which then leads you to a website, an article, a photo, a name, and before you know it – you are married because you’ve just found the one you’ve been looking for all your life. Such telepathic connections also share a telepathic emotional exchange, which may sound similar to empathy but it’s more intense; you just know how the other feels, as if you are psychic or clairsentient, but since it’s mind to mind connection, you might see an image or the “emotion” itself will come into your mind.

Such connections are incredibly bonding on all levels, emotional and spiritual. However, you do know exactly how each of you feels, what their thoughts are and where they are; you become open books to one another, which is what a long-lasting committed trusting relationship is anyway. Nonetheless, be mindful. Last but not least, stay truthful, respect one another’s space and boundaries, and have integrity and accountability, especially when it comes to anything related to the spiritual realms. And remember: love and appreciate one another, with words and intential dialogues.