Behind The Scenes: Creating Poetry, The Otherworld + Celtic Goddess Brigid 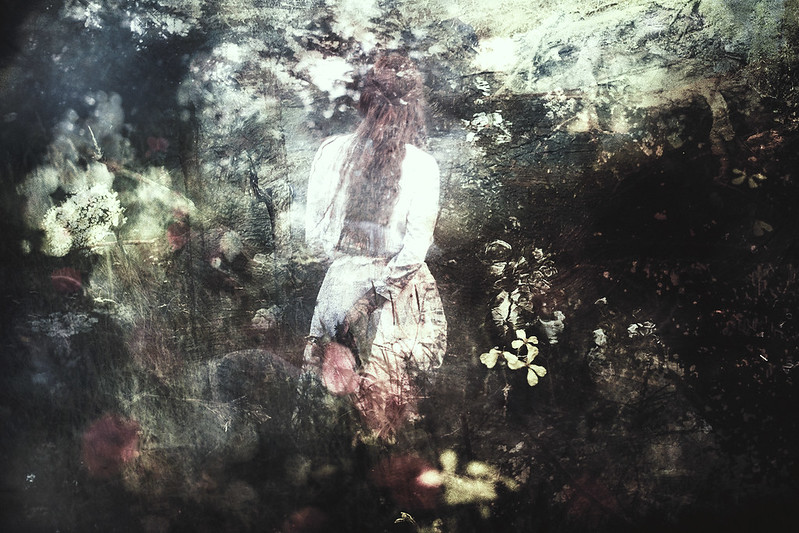 It begins with a feeling; as something or someone that weaves through the ground, beneath my feet, moves in the soil until it decides to surface, tempted by water, tempted by air; to reach its hands for merging. And I try to shape it into words; to give it a home on a page while not losing its movement and feeling.

Some stories need to become old enough to be written. So learning the cycles of the land, within and without is important to honour and accept. There are days when I just don’t feel like writing. And there are time periods when we don’t feel inspired. I am someone who always gives my heart and soul, my everything poured into all that I am doing, no matter what it is. So it is natural that after such pouring, we might feel drained and need time to recharge.

English is not my first language so sometimes I look up words. But I select them based on how they sound rather than exact meaning. I just really love some sonic string of letters. I also imagine it as movie scenes because I am very visual, and then need to add some film voices and sounds.

I remember when I was writing Moonhold, I didn’t even know its title and I barely knew what story would unfold. What it became as its final shape, was not what I had imagined or thought of or even planned. And that’s the beauty of creativity; it is how the divine speaks and channels through us. It’s like an artist without reason, without vision, just wiping paints with bared fingers on canvases.

We need to become comfortable with not knowing. Life unfolds as the story unfolds on its own timing.

For me, it’s like a relationship with the otherworld; with the mystical and unseen.

You know those moments? Maybe it was a touch on your shoulder. Or a sudden whisper in your ear. Maybe the lights turned on by themselves. Or a song comes on with the exact words you needed to hear or you see a rabbit at night surrounded by concrete high-rises, in a place you’d never see a rabbit at any time.

Maybe it was a dream that wraps around you for the entire day.

When the other world communicates with us, it is always on its own timing. And it is usually during our most unexpected moment when we were doing the most mundane thing. Like folding our laundry or getting out of the shower or making lunch.

And then something happens.

The worlds touch one another.

And we’ve witnessed their love.

And we find that love is not just felt in the heart, it is known in the hands too.

Whether it was something we saw, we smelled, we touched, we sensed; we just know there is a liminal quality to this moment that is very real.

When the otherworld communicates with us, it is always on its own timing. Magick (or such enchanted encounters) shows up not when we want it or when we think we are ready for it; it shows up when it is ready.

And when it shows up, we’ll have a relationship with it.

These liminal experiences from the other side have their own terrains and lands; and they are never straight nor direct. So it is important to develop our language with the sacred, to communicate with it better. This would be very unique and specific to us; what may be one definition for you would not be for another.

Spirit is imbued in everything and the divine communicates with us continuously through its own sacred language.

This is how my creative process unfolds. It is a relationship with its own timing, its own scent each time.

I’ve always been inspired by music and as a dancer, I often just go into some states of complete surrender where my parts are extensions of sonic words. There is freedom that I find when I dance, and creativity needs freedom to breathe truly.

Dependency kills creativity. Rule of thumb: always write for yourself. Don’t worry about the others or if you do worry (which we all do) then worry later but don’t change your voice.

Writing my second book feels like I’ve walked into the deep woods; it smells of amber, love and old magick. It is a different feeling than Moonhold in the sense that it is more of a mystical story.

I’ve always had great imagination and vivid dreams which inspires me. Actually the phrase “night open mouth wide of fireflies” from my book, Moonhold, is an image that I saw in one of my dreams. The difficult part is just finding the words to paint such incredible images. But most of my words come to me at night when I’ve let go and when my mind is relaxed and I’m at peace.

I listen and follow the melody at the very edge of my hearing, and separate into many selves to enter the landscapes unveiling. As a dream, my many selves rise from my body; arms, legs, eyes, belly, hair, ears, nose. Some trace the movements and hard edges beneath cotton, others chart the uncharted roads. Some keep house, weaving faithfulness of lace. Others follow the beloved sharpened by instinct and scent of vanilla.

Carried along in rivers or along the leafy paths that seekers often take, my body becomes like a lighthouse of perception. The souls of my feet walk with wolves and black panther, and tiny wild creatures wrap around me. The Shamanic eroticism of the Lord of Fiery Sword, of Himself, lures me deeper. And this North American winter coldness holds me to absolute honesty. When branches are bared, all is seen.

The otherworld is everywhere. It’s never been a question to me whether it exists or not. Even when I was just a child, I was more sure of it than of some real tangible things around me. I’ve seen enough to know it’s real. And life never needed our validation anyway. It just is.

From one pool of consciousness into another, I leap. And I stare into my own eye. Fall into the black pupil. And stare some more. Until I see another’s eyes. A stranger, once strange now known. And I hear the constellations of distant voices, either mine or imagined, or someone else’s.

Sensitive blues and golden whites. Roads appear and disappear. I carve boats and bodies to travel in. Build shelters for cradle. I enter changing woman weaving house. Weaving and spinning the ever changing web of wyrd under the constant beat of the only sound there is: of love.

I weave sacred lovers, tenderness in tents, integrity of emeralds, laughter of otters, clouds into winds, tides for the fishermen, lyric of hearth and the seed of the eagleman. I follow the braid of the yarn; searching for the truth of the cloth that I made.

Essentially, I allow myself to enter the unknown and see where it leads me; a wooden lake is where my second book loves to go to. And after a couple of months of not knowing what the hell I was writing (or rather not writing), now I can see it more clearly. In the morning, I am re-stitched by the bright edges of sun. And all my parts gather to kiss and dive back into a single body.

Everything is imbued with spirit and carries its imprint of scent. I am particularly moved by scent and often use candles while I write. The above video is of the candle that was burning while I was writing Moonhold. It was made for me by the amazing Andrea Of Alchemy.

The candle is of the Celtic Goddess Brigid. Its flame was passed on from the Sacred Flame of Avalon carrying blessings from Kildare, Ireland and connected to the Goddess’ Eternal Flame. Brigid is associated with fertility, poetry, home and hearth protection, empowerment, creativity, wordsmiths, crafting and child bearing. The legacy of the flame of Brigid Kildare (meaning church of the oak), Ireland is that there was a practice of 19 flame-keepers who perpetually tended the sacred eternal flame and it is said that on the 20th day Brigid would tend the flame herself. The flame is also overseen by the protective energies of Archangel Michael.

As I lit it up during a couple of times of my writing, I wanted to bless my book with this beautiful flame; one of dedication, nurturing, love, respect, privacy and devotion. It is about union, tradition and sacredness; a merging and honoring of all of our worlds and faces, seen and unseen, and of the wisdoms and beauty beyond the veils.

Soy coconut wax dressed in roses, blessed thistle, chamomile, jasmine, hibiscus and scented with violets, lily, sandalwood and dragon’s blood. These scents were airing in my room at the time of writing and led me into the world of Moonhold.

I feel a very strong resonance with Celtic mythology and similar scents are leading me into the worlds of my second book as well. So far, it’s definitely very enchanting, mystical, innocent and honest.

No idea what will shape of it yet but I am excited to see where it leads. And each day, I take it as it comes. I trust that what is meant to unfold and be told, will. I trust that it will be as it needs.

In perfect love and perfect trust, it be.

My intention remains of love.

If you value what I do, you can support me by sharing my articles and poems, buy my book or donate some magic coins in my hat on Paypal. By supporting me, you allow me the freedom and ability to be even more creative and contribute with more products/projects. All proceeds go towards expanding my work made of love, including writing my second book and creating content including audio recordings.